Edmonds Entrepreneurs Are All About Community

Imagine having a dream—a vision—and then reaching out and touching it. In the town you love.

Now, imagine the people around you reaching out and touching it, too. And then turning around to look at you, their eyes sparkling and full of gratitude as they come in for a hug and ask you how you’re doing.

But, they don’t ask just about you. They ask about your partner, your kids, your dog, your garden, and that event from last weekend you hosted.

You’re one of them.

They know you, and they love you.

For a large handful of business owners in downtown Edmonds, reaching out and touching their dreams is a very real, everyday reality. They built them—one step, meeting, permit, new hire, sketch, decision, and deep breath at a time.

They also built their businesses with the support of their community behind them.

While we could have spent weeks interviewing downtown Edmonds entrepreneurs (and, trust, we would have if kids and school pick-ups and deadlines weren’t pushing every day forward at warp speed), this story is about four who have created at least two businesses each within our small downtown business district.

And, really, they’ve done it all mostly from scratch.

In a town that is concentrated in eight and a half square miles with a vibrant downtown that is just a small fraction of it, it’s incredible to witness the sheer sum of small businesses operating in Edmonds. At our last count, there were nearly 200 small businesses within our downtown bounds, with more moving in each month.

For each of the entrepreneurs we talked to, their Edmonds motivation was simple: Edmonds is home. 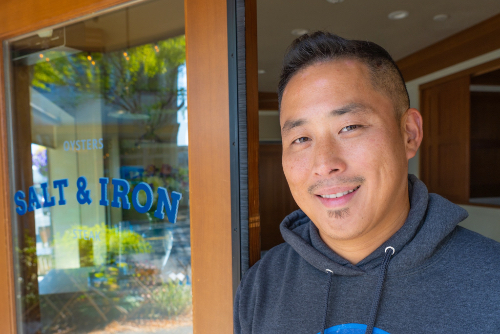 Shubert Ho operates four of his more than half a dozen restaurants (Fire & The Feast, The Market Fishmonger & Eatery, SanKai, and Salt & Iron) on Main Street. After following his wife to Seattle, where she was attending the University of Washington, the Hos bought their first home in Edmonds, not only because it was near family but also because it was here they found a house they could afford. The catering company Ho launched with partner Andrew Leckie (his wife’s cousin) became the springboard for Feedme Hospitality, the umbrella under which his restaurants and various food ventures operate.

Michael McMurray, who is deep in the throes of building what will become Main Street Commons, was born and bred in Edmonds. Not only does he own Raymond James Financial Services on 5th, but he also owns the building that became Leftcraft.

The ½ acre corner lot that will become Main Street Commons was sold to McMurray because of his deep Edmonds roots. As he was thinking through his vision for the Commons and soliciting feedback from friends and neighbors, Edmonds was at the front of McMurray’s mind: “The idea was to assimilate into downtown Edmonds. It’s a very walkable town. I thought, How can I help Edmonds?”

Main Street Commons is a plaza concept, with multiple local businesses operating within it, both morning and night—a bakery, a pizza restaurant, a Molly Moon ice cream shop with huge glass windows and benches outside where customers and passersby can watch cold cream churning in big drums. There will be a ground-level performance area and frequent music from local artists. The town’s 1938 fire truck will also move to Main Street Commons. A mural celebrating Edmonds’s history and peoples has been commissioned on the roof. Michael is creating in Edmonds something he wanted but didn’t necessarily see: “It’s a small little village hub where you can charge your batteries,” he said. Day or night. 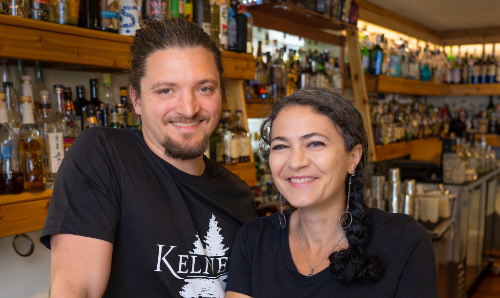 Just across the street is another place Edmondsites have recharged since it opened in 2019, Kelnero. Owners Kris and Kali Kelnero (she of Edmonds and he of Lynnwood) knew they wanted to open a great cocktail bar in Edmonds. Tired of driving to Seattle for date nights, they also built what they didn’t see in town. Kelnero was built on a few foundational tenets, one of which was “an amazing cocktail experience”—minus the commute.

Last year, Kali and Kris were asked to take over The Cheesemonger’s Table in Old Mill Town. Vinbero—Edmonds’ first wine bar—wasn’t in their five-year plan, but former owners Maria Montalvo and Strom Peterson “saw our ethics at Kelnero,” Kali said, so “we just went for it.” 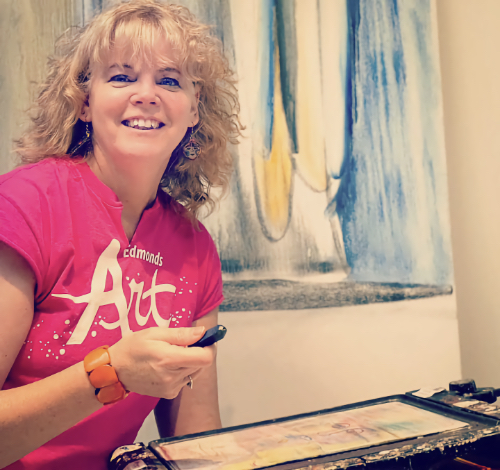 Similarly, Tracy Felix of ARTspot and Graphite Arts Center has made it her mission to just go for it. Since moving to Edmonds more than two decades ago, Felix has delivered on making art more accessible to the community through teaching at Maplewood Co-Op; her foundation, Art Start Northwest; and regular classes for all ages at ARTspot.

Graphite Arts Center, an airy, bright, and open home for working artists, enthusiasts, and students, boasts soaring ceilings, a gallery, a dark room, an art book collection, flex space, and inspiration galore. Felix and Mary Olsen partnered on the space, with Olsen sketching plans that she eventually handed off to an architect to bring to life. They’ve been working on the concept since 2015, and it was made real last year when Graphite opened its doors. When we mentioned to Felix that Graphite seems like a beacon on the corner for the creative community in Edmonds, similar to a lighthouse showing seafarers their way home, she agreed that she and Olsen wanted the building to be highly visible. “We wanted to make the building transparent—literally,” she said, gesturing to the wall of windows facing Main Street, the art book library spanning two walls, and a big, wooden table.

It helps that Felix is a fine artist herself and one who has been deeply involved in Edmonds for decades because she knows what artists of all ages and stages need from a space like hers: “Artists need to have community with other artists,” she said, “And they need to have solitude, too.” 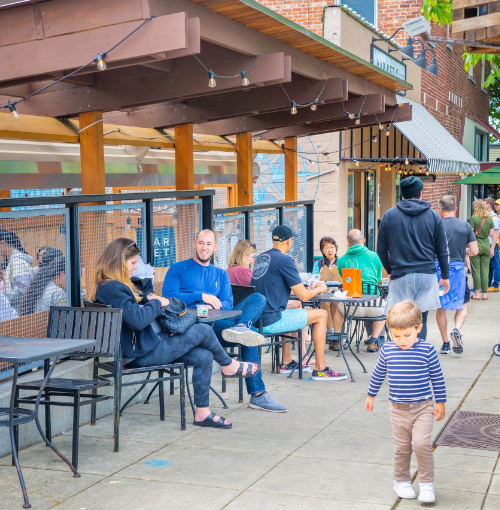 What keeps all of our entrepreneurs pushing forward, despite delays or staffing shortages, or a worldwide pandemic is their love for and consideration of our shared community. For Ho’s part, he turned Feedme into a community kitchen at the height of COVID, providing deeply discounted school lunches and meals to people who needed them. It was a decision steeped in the idea that “There’s got to be a better way to give back to the community.”

McMurray echoed that community-centric sentiment. When sourcing tenants for Main Street Commons, he started locally, talking to his favorite vendors at the farmer’s market to see if they’d be interested in having a brick-and-mortar. “For me, this was an opportunity to do something unique and contribute to the town in a positive way,” he stated. “This building has a lot of mojo. I don’t take the opportunity lightly.”

Similarly, the Kelneros wanted to give Edmonds more great drinks and use as many “fiercely local” ingredients as possible. Their 800+ bottle library ensures each customer’s experience is fresh—every time. And while the cocktail bar’s original menu started with a dozen delicious libations, it has grown to pages and pages of fun. “I knew I wanted the menu to read like a graphic novel,” Kelnero said. “It’s my job to show you the drink’s personality.”

Just down Main Street, Graphite Arts Center currently has limited public hours (Saturdays from noon-4pm), and Felix’s next goal is to become a haven for art kids who don’t always feel at home in other settings. They are actively seeking more volunteers to keep their doors wide open to whoever wants to come in, dream, sketch, and soak up inspiration.

The Burning Question: What’s Next?

Ho plans to expand his catering operation into a bigger commercial kitchen. Once McMurray gets Main Street Commons open and thriving, he says he has one more project in him, “if the town affords me the opportunity.” Kelnero is keeping her eyes open for a place “with a really big kitchen,” and Felix summed up the entrepreneurial spirit in one beautiful sentence: “I love launching ships, but not sailing them the rest of my life.”

Whatever they choose to do, we’ll be here to cheer them on.

Will you be visiting any of the businesses we mentioned? Take us along! Add #edmondsdowntown or #loveedmonds to your posts on social media, and we’ll share them to our stories on Facebook and Instagram. From attorneys to fitness studios, Edmonds has everything you need. Dine at our wide variety of restaurants, cafes and pubs! Visit unique boutiques and shops—something for everyone!